WHAT STYLEZ THINKS ABOUT => iPhone 6 Plus #Review #MyTech 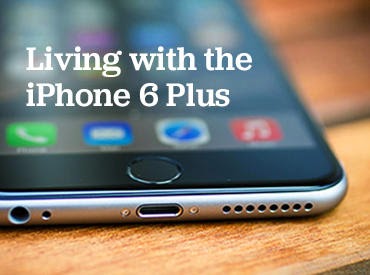 So my first week with the iPhone 6 Plus has just went by, and I am in a word, satisfied. I have been using an iPhone 5 for a little over 2 years, and while it was my 2nd most used phone (out of the 4 I used over the past 2 years), it was my least favorite! Most people know how I feel about Apple...it's a love-hate relationship. Mostly hate! Anyway, because of my day job, I must have Apple technology at my disposal and the iPhone 6/6+ update was my chance to at least get an iPhone BIG enough to handle what I felt an iPhone should have been able to do YEARS ago. Satisfy my need for size, quality and performance.

Quality is subjective I think. What I feel makes something a quality product, may or may not, appeal to others. And vice versa. Therefore, all the reviews of the i5 and i5s which touted the "quality of the iPhone build" just didn't quite make sense to me. I, of course, did prefer the metal build in the iPhone over the plastic in the Samsung devices. But I didn't actually own a Samsung. I had a Motorola Droid Razr Maxx. A phone which was made of metal and kevlar coating. So build quality, comparatively speaking, was severely lacking on the iPhone side. My Razr Maxx took a BEATING, one that would have CRUSHED a mere i4, and put a severe hurting on an i5/5s! And that it did. At the end of THREE years, my Droid Razr Maxx still looks brand new...even after using it with no case, and allowing it to take several 5-10 foot drops, also letting it fall into a 6ft pool and being submerged for well over 90 seconds! Still worked and performed like a champ, though not 100%, but at least 90% of the time! My i5, which was coddled like a baby, and never without a case for 18 months straight, was at times, borderline buggy and when I took it out of it's CASE, it was scratched and battered beyond belief! YES, it couldn't even handle life INSIDE a case! SMDH! And as for size...well, we all know how stupidly small iPhones have been for years! Even the i5, with it's (fake) 4" screen dimension, was still ridiculously small and incapable of being a media consumption device!

Well, that's all changed with the iPhone 6 and iPhone 6 Plus! I opted for the #BigDaddy, and so far it's a BIG ASS iPhone! LMBO! But it's nice to be able to finally have it work nicely for watching video. i5's and definitely i4's were TERRIBLE for watching anything...video, animations, texts, anything!!! Now it's a much better visual experience. However, even with a 5.5 inch screen, and a body that is actually LARGER than the Note 4, the iPhone 6 Plus STILL does not support real-time, on screen multi-tasking! That's not a deal breaker, but it's a feature, again, Apple should have considered.

Though it still sucks for typing since Apple has learned nothing in 8 years about keyboards, but having a larger keyboard does provide a 25-50% improvement in key accuracy. However because I am still used to my Android and BB10 keyboards, I still expect a lot more than Apple is apparently willing to provide! But the nice thing is, now with iOS 8, you can use 3rd Party keyboards (without needing to jailbreak). Unfortunately, it's not seamless, as in some apps, you have to specify the 3rd party keyboard, although you've activated it in the system and on other apps. And even some apps restrict the use of keyboards, so you're still stuck with the Apple keyboard, no matter what! #KeyboardFail

Integration in iOS 8 is 100 times better, although it is still a huge work in progress. There are times when integration works well...like being able to share a picture directly to Facebook or Tumblr from the Gallery, or even better, being able to open an address link directly in Google Maps. But if it does open in Apple Maps, there's a quick button to take you to "other installed map programs", like Google Maps! But then there are a bunch of times when the integration fails or is not there! Like, with those same pictures you can't share them to Instagram or Google+! And sharing web pages doesn't offer all of the apps/services installed for consumption...or the fact that Youtube videos still don't open in Youtube at all!!!

I was asked by a friend, what I thought of the camera. And I must say, I seriously can't tell the difference between the camera on the iPhone 6 Plus versus the iPhone 5. They added Time Lapse when they did iOS 8, so that's on both. But the 6 Plus also has Slo-Mo, which the 5 never got. They are the same quality, 8 mega pixels, and I believe the lenses are the same, just some minor tweaks to the sensor. Apple doesn't believe in increasing the resolution of their cameras. Year-over-year they contend the 8MP is sufficient, and their minor tweaks and a new feature here and there is enough. Though, I have to admit, up until 2012, the iPhone did have one of the best cameras in the smartphone game. But with the HTC One in 2013, the G3 and the Note 4 in 2014, the iPhone camera is starting to be dated and playing 3rd or 4th fiddle to the android top dogs!

So overall, the phone is a good upgrade, definitely worth the time and money if you're using the older iPhone 4 or 5, or the lesser featured iPhone 5c. But I am still not convinced, nor a convert. Maybe by iPhone 10 or 11 they will finally get it together! Until then...I'll just be...Satisfied!
Brought to you by Unknown at 5:28 PM