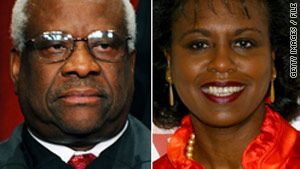 (CNN) -- Anita Hill, whose accusations of sexual harassment almost derailed Supreme Court Justice Clarence Thomas' high court nomination, has no plans to apologize for the charges she made nearly two decades ago.

The response from Hill, now a law professor at Brandeis University in Waltham, Massachusetts, comes after a message left for her over the weekend by Thomas' wife, Virginia, who requested an apology.

"I certainly thought the call was inappropriate," Hill said in a statement to CNN issued by Brandeis. "I have no intention of apologizing because I testified truthfully about my experience and I stand by that testimony."

So What Does STYLEZ Think?

This is all kinds of ignorant! I'm trying to figure out if Ginni Thomas is just looking for publicity or is just straight CRAZY! SMDH! That's like telling a crime victim, I know my husband robbed you blind, but you shouldn't have had all that flashy stuff, I'm really going to love you if you apologize for making him smash & grab your crib!!! Some people have their damn nerves! SMH!

That's what Stylez thinks! What do you think? Please comment!